map DIRECTIONS TO LUCKY LAB - 915 SE Hawthorne from original meeting location Marry Starret will meet with the PDX truth Alliance on 2/28/07 from 7:15-9:15 PM at the LUCKY LABRADOR Brew Pub - 915 SE HAWTHORNE - in Portland. It should be a very interesting time. . Starrett started as areporter for ABC affiliate KATU and later co-hosted the "AM Northwest" television show for many years. She ran for Governor in 2006 on the Constitution Party ticket. Mary Starrett believes that George Bush knew about the plan for the 9/11 terrorist attacks before they occurred and let the attacks occur. . The remarks were made on KPDQ radio in Portland, and led to her radio show being canceled. In a interview on KATU TV on September 26, 2006 she reaffirmed her beliefs that Bush knew about the plan for the 9/11 attacks and let the attacks occur. You can see more information about her at the follong link http://en.wikipedia.org/wiki/Mary_Starrett homepage: http://pdx911truth.blogspot.com phone: 503 287 3473 address: MARY STARRETT media meetup 7:15pm tonight at LUCKY LAB - 915 SE HAWTHORNE
Posted by gnome at 5:21 p.m.

- free handout of 9/11 and context related video documentary dvds, cd-roms and audio cds for those attending 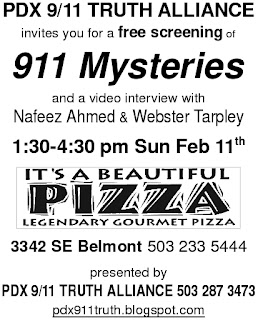