Everyone is talking about... American Blackout! 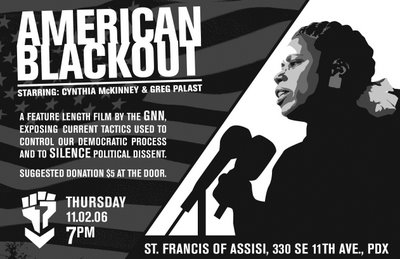 
Whatever you think you know about our election systems or Congresswoman Cynthia McKinney, this film will make you question further why the news media fails to accurately inform the public. Directed by GNN's Ian Inaba, creator of Eminem's "Mosh" music video, American Blackout critically examines the contemporary tactics used to control our democratic process and silence voices of political dissent.

Many have heard of the alleged voting irregularities that occurred during the presidential elections of 2000 and 2004. Until now, these incidents have gone under- reported and are commonly written-off as insignificant rumors or unintentional mishaps resulting from an overburdened election system.

American Blackout chronicles the recurring patterns of voter disenfranchisement from Florida 2000 to Ohio 2004 while following the story of Georgia Congresswoman Cynthia McKinney. Mckinney not only took an active role investigating these election debacles, but has found herself in the middle of her own after publicly questioning the Bush Administration about the 9/11 terrorist attacks.